Are you stuck trying to figure out how to get rid of bamboo? You’re not alone. It’s a long and drawn out process that can involve many laborious hours in the garden and then still take you years until it’s completely eradicated.

Popular reasons for people planting bamboo is its effectiveness as a privacy screen. It is great for that, but not everyone is aware that there’s two types. Clumping and running varieties.

Planting a running bamboo species to erect a natural privacy screen may seem a good idea, but it has no concept of boundary lines. Bamboo will run under fencing, walls, and patios, stretching easily into neighboring yards.

Wherever bamboo has become a problem and you need it gone, you are in for a battle. The only way to win one of those is by arming yourself with a strategic battle plan.

Consider this guide on how to get rid of bamboo your go-to resource with a number of methods you can deploy to eradicate bamboo completely.

As this is an invasive plant with no respect to boundaries, also included is bamboo control measures because if this invasive plant is on your neighbor’s land, you can only do what you can to prevent it from destroying your yard. As much as you may want to, do not take a shovel to your neighbor’s garden, unless they say you can.

Before you go to battle, you need to know what you’re fighting.

Running bamboo is the invasive type. Some of the more common species include:

Invasive bamboo species grow horizontally underground. The stems are called rhizomes and in one growing season they can stretch as far is 15-feet. Without a barrier to control the spread, they will consistently keep on growing.

Rhizomes are long and thick with a wood-like structure and it’s strong enough to crack concrete. Naturally, these can’t be allowed to grow anywhere close to your home as it is likely to cause structural damage and where it grows under driveways, it can cause the surface to buckle under the immense pressure from the rhizomes and the thick cane stalks shooting up from the rhizomes.

That’s one of the main reasons for people needing to know how to get rid of bamboo. Without addressing the problem, running bamboo can wreak havoc in and around your property.

Clumping bamboo is best planted in containers, or with a barrier surrounding the roots to prevent the spread. If that hasn’t been done, it will still be easier to get rid of a clumping bamboo plant than it will be to get rid of rhizomes underground from running bamboo.

You can tell the difference between running bamboo and clumping bamboo by inspecting the base of the plant. The roots of a clumping bamboo plant have a circular rooting system. They still have rhizomes but they are a lot shorter, and they stay in close proximity to the mother plant.

Within the clumping types of bamboo, there’s another notable distinction that needs to be made and that’s the type of clumper it is. Running bamboo grasses are all monopodial branchers, meaning the rhizomes always grow horizontally and sprout sporadically. Clumping species are sympodial growers and there’s a few types of those.

Sympodial tufted bamboo types can spread, but they always do at a short distance, staying relatively close to the mother plant.

Sympodial-scattered types of bamboo are almost like the running bamboo but rather than spread for distances up to 15-feet, the rhizomes often spread at distances of 0.5 metres to 1 meter apart.

They have the term sympodial scattered because there is no pattern to where the culms will emerge, other than that it being within one meter in any direction of where the mother plant is in the garden.

Mixpodial types of bamboo are combination of sympodial-tufted and sympodial scattered bamboo plants. The rhizomes grow horizontally underground with new stems/culms emerging in a scattered state rather than on every node as they do on invasive bamboo, which also goes by the name running bamboo and monopodial bamboo.

The only difference between a monopodial type and a mixpodial type is that on the runners, there’s one bud on every node.

How to Get Rid of Clumping Bamboo

Clumping bamboo types are the simplest to remove because the rhizomes tend to stick really close to the main plant. Even if it is a scattered type, it’s unlikely to extend to a similar length of running bamboos. Sympodial-tufted bamboo plants grow in circles and you won’t find the rhizomes extending beyond 2-inches from the outermost stem of the plant so that’s where to start digging.

The root ball of a clumping bamboo is what needs to be removed and the depth you need to dig to will depend on how long it’s been growing.

An aged bamboo plant that’s been around for 10-years or so could be a couple of feet deep into the soil. Younger plants will still be developing so won’t need as much digging.

Digging is going to be needed so you can get under the root ball to lift it out of the ground. If you’re getting rid of clumping bamboo completely, cut it down to ground level first. If you have someone willing to take it off your hands to use in their garden, or if you’re only planning to move the bamboo to a different part of your yard, it doesn’t need to be cut down but it will likely be a two-person job to lift and move it.

To cut the culms down to ground level, a strong pair of garden shears will be needed. A pruning saw is better equipped to cut through thick bamboo culms.

A regular spade will be sufficient for removing clumping bamboo, however if you have scattered bamboo, there’ll be more digging to reach the rhizomes and it will be a lot more strenuous to cut through those to remove them.

To make the job less labor-intensive, a root cutting spade will make your job easier. These have blades around the edges that can be used to slice through rhizomes as you dig, saving the hassle of switching between a spade and a cutting tool like a pruning saw every time you find another rhizome.

Whether you’re pulling up sympodial or mixpodial bamboo plants, the area will almost always be close together, so eradicating the rhizomes is easier than getting rid of running bamboo.

Once you have the root ball of the bamboo out of the ground, you can start to refill the hole. As you do, keep an eye on the soil to make sure there are no rhizomes still there as if any part of the rhizomes stays in the soil, the bamboo will come back.

Once you’ve refilled the hole, keep an eye on that patch of soil for the next few months to make sure there’s no regrowth. If there is, a trowel should be enough to dig up the soil and find the rhizomes that were missed.

How to Get Rid of Running Bamboo Without Herbicides

The simplest, but by far the longest way to get rid of running bamboo is to deplete it of energy until it dies. It is a long process and the timing needs to be right because you want the plant to put all its energy resources into growth, then when it’s at its weakest, cut it right down to ground level when it doesn’t have enough energy to fully regrow.

It will still grow back, just not as big, nor as strong. The ideal time to start getting rid of invasive bamboo is in the spring.

Most shears can easily cope with cutting through culms up to 2-inches in diameter. If you’re dealing with thicker culms, an electric chainsaw would be more efficient.

The faster you can get it grow back, the faster you can cut it right back down. The more you repeat this process, the more stressed the plant gets. It will throw its energy into shooting buds and leaves above ground, starving the rhizomes below ground of the energy they need to grow horizontally underground.

Only let new culms grow to about three feet in height, then cut it back to ground level again and keep repeating that same process.

Continue the cycle of cutting down to soil level, treating the soil with a fertilizer such as 20-5-5, letting it grow to a few feet then cutting it back again. Each new growth will be smaller, thinner and look terrible, until eventually, the rhizomes will have exhausted so much energy, it kills the bamboo.

How to Get Rid of Bamboo in the Fastest Way Possible

If you need your bamboo gone in a rush, there’s no getting around digging. Excavation is the only way to get underground, reach the rhizomes, break them up and dig them out. It is a labor-intensive job and depending on how far it’s stretched, and in what direction, you may need to bring in some pros.

Examples of when you need help from professional landscaping companies are if the rhizomes have grown under paved areas, are under a driveway causing it to buckle, or it could be that it’s growing too close to your property that it risks damaging the structure.

For running bamboo in your yard that isn’t too close to any buildings, digging down to a depth of 2-feet will expose the runners. Follow the runners, use a pruning saw, shears or electric saw to cut through the rhizomes and remove them from the soil.

Digging and cutting are the hard work, but the most time consuming will be following the route of the runners and inspecting the soil to make sure every part of the rhizome structures are removed to prevent future regrowth.

For heavy invasions of bamboo, trying to starve the rhizomes of energy is often ineffective and needs herbicides used to kill the bamboo. It is still a long process, requiring the culms to be cut to ground level, then given time to grow, the same way that’s used to get rid of running bamboo without any chemicals.

However, the more the running bamboo has already spread, the more energy it will have on reserve, therefore, if you don’t use any chemicals, you could be repeating the cut, fertilize, grow, and cut cycle for years and years. By introducing an herbicide, it can speed up the process, and this will be a process because there’s no quick fix, other than excavation to get rid of loads of bamboo.

The most effective herbicide to use on bamboo are those containing the active ingredient glyphosate. Best practice is to apply it using a paint brush directly to the leaves, and stalks of the bamboo each time it’s cut down and then water it to speed up the application.

Spray herbicides are best avoided as those will contaminate every plant around the bamboo and the soil.

How to Control Bamboo Spread from Neighboring Land

When spreading bamboo is reaching your property from neighboring land, you need a root barrier installed. On flat ground, these can be installed either around the bamboo to contain its spread, or installed along a fence line or garden wall.

On flat ground, the ideal depth to install a barrier at is 2-feet. A 3-feet barrier is preferential on sloping ground.

If you don’t continually keep cutting back the rhizomes, they can creep over the barrier and continue spreading, so root barriers will not in themselves, prevent bamboo spread. They only make it easier to control the spread. 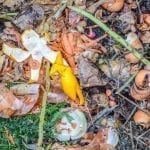 How Often Should You Turn Compost? (And Why It’s So Important) 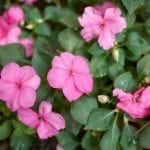 5 Reasons for Impatiens Not Blooming (Plus the Fixes) 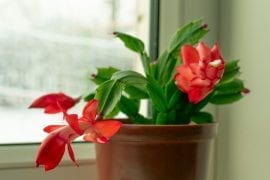 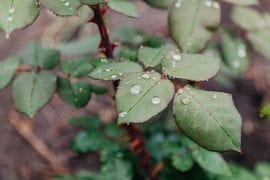 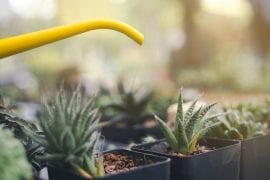